1 Series from Nikon has been under critics and praise, just like any other cameras out there. However, the industry followers like me can clearly see one side is heavier than the other.

Starting from the poor positioning for each of their lineups, unclear series’ vision, as well as obsolete innovation, it is hard to see the series will survive a decade like its brothers DX and FX series.

You might recall there were 3 alphabets representing the series, S for the low end 1 cameras, J for the middle ground, and V for the top-of-the-line. Then an addition, AW series, which can outstand the elements, joined the series.

AW series is the first interchangeable-lens camera you can take swimming, and it was definitely a nice addition for adventure photographers looking for a durable camera.

The other lineups, however, never made clear whom they are intended for. With the smartphone camera on the rise, everyone agrees people abandon their compact cameras, yet the S series try to argue people can get a better quality picture by carrying a camera that, unlike compacts, can’t be put in your jeans pocket due to its lens protrusion.

Then the J series, which confused people even more since it is not significantly different from the S series, with a no-questions-asked worse picture quality than a DSLR although ‘slightly’ better than your compacts and smartphones.

Of course, the V series said ‘Forget your SLR’ although Nikon doesn’t want market cannibalism for its own SLR, so they highlighted the 1″ sensor speed but never said it is meant to replace an SLR.

Comparison of the 1 series, V-lineup, AW-lineup, and J-lineup, respectively. The S series has been discontinued as of now. Source: Nikon USA

2015 financial report from Nikon showed really bad selling performance of Nikon 1 series. If you really want to know the in-depth reasons and what the expert photographers think about it, take a look at the links below this article, or see the highlight here:

And I cannot argue against any of those. Try asking other photography enthusiasts.

Comparison of sensor size across Nikon’s three systems. The larger the sensor, the better picture it produces. Source: btobey.com

I don’t understand why would anyone want to buy a Nikon 1. If you are looking for a lighter alternative for our SLR or even CSC, you could get, maybe Lumix LX100 (larger sensor ), Sony RX100 (much more compact), or even the cult-maker Fuji X100 (no explanation needed).

Nikon said the Nikon 1 performed best in their home market Japan, yet when I visited Tokyo, I didn’t see any Nikon 1 being used or even in the store.

Preference wise, as an enthusiast I also avoid their overly simple design and poor ergonomics in the S and J series.

I talked to a neighbor working full time as a professional photographer, and he also criticizes the V1 heavily, which he owned (but almost never used) for about a year already. 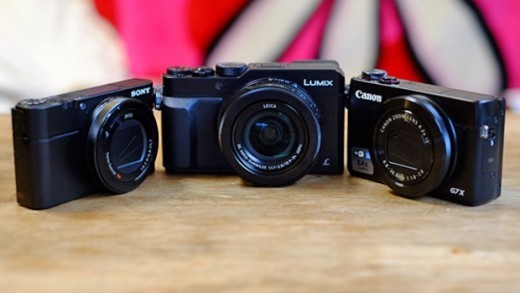 It is hard to justify buying Nikon 1 when many cameras offer the same, even better performance, in a much more compact form and reasonable price. Source: HubPages

What Nikon told us

In the same financial report I mentioned earlier, Nikon also already stated that they are reconsidering the market positioning of the Nikon 1 series. And by today (June 2016 at the time of its writing), you can smell the movement of this statement already.

I want to emphasize the third point most if you still hasn’t sniffed anything out of it.

Nikon always segments their market based on sensor size: Full frame, APSC, 1″, and smaller ones. Now, the DL series occupy the 1″ sector, which WAS intended for 1 series.

It is indeed too premature to assume that Nikon simply follows the requests that 1 series use a larger sensor. After all, the name of the series itself born from the 1-inch sensor it uses. Also, if they go with a larger sensor, what we all going to do with those 1 series lenses? They only cover the 1″ sensor and will force larger sensor cameras to use only a portion of their sensor.

Something worth noting is that according to Nikon rumors, there are leaked copyright registration from Nikon involving the development of several Nikon 1 lenses, with most of them appears to be consumer zoom lens. With this in mind, it is unlikely that Nikon will discontinue the lineup anytime soon.

Nikon will continue and always use 1″ sensor for the 1 series, but that it will gradually become cheaper in price, offered as a niche camera that never meant to replace SLR or make compact cameras obsolete (smartphones do it better). If the pricing finally is done right, then perhaps it can target people first-time camera buyer with it simplified settings and smaller size, and maybe professional photographers can finally consider it as their ‘backup weapon’ during photo trips – something that hasn’t happened today due to the system’s high pricing.

As evidence, Nikon recently re-categorized the lineup once more. The J series now are marketed as ‘every day’, V series as ‘Performance’, and AW as, you guess it, ‘adventure’. S series is completely gone. Thank God, potential buyers (if they ever exist) won’t have to confuse themselves with so many products overlapping each other.

The latest J5 also nicely revamped and addresses the most thing people complained about – looks. It finally came with a modernized retro look adopted by Fuji X100 and Lumix Tz-70. Its dials are now also tailored towards enthusiast with PSAM modes directly selected through the knob. BRAVO !

Despite the good things, it is best to stay away from investing in the Nikon 1 system. Whatever fate Nikon decides to its 1 series, it doesn’t seem to be good for us consumers, especially while we have better mirrorless alternatives right now.

There are many forms of cameras to suit any needs today, but Nikon 1 struggle to find a particular need to serve. Source: Photography Mad

Other Posts that Agree with Me