Getting sick of Christian fanaticism

Let’s face it. I am a Catholic (technically Christian as well) but I’m getting tired of Christian fanaticism that only tear people apart instead of unifying.

However today I could not help myself but to rant a lot with this kind of shit. For starter, this video

Yep sorry it is in Indonesian, but TL;DR, that Christian priest is saying that two of the holy people beside him was saved from the doomed QZ8501 trip because they received some kind of holy oil bla bla bla from him.

Think I’m sharin this religious Tuhan mahakuasa video because I’m a devoted Christian (or should I say fanatic)? Nope. Eat my opinion that this priest is talking nonsense but bullshit. One of our CATHOLIC brother definitely was in that plane. So that basically sayin that his holy oil blahblahblah is the one protecting HIS (not God’s) jemaat/follower/umat/worshipper blah blah blah? Ha-Ha. I won’t see you in heaven then.

Good luck facing God since he will be measuring you with some litres of oil :)))

oh, and if you are with this priest, let’s have some coffee. I would like a long talk with you (if you dare of course). Don’t worry, I will pay for the coffee, plus I will give you some free oils, so you get better chance of going to heaven.

The couple boy also said “Something with grapes and oil will be protected” (it was said in a more religious way, mine was simplified). So I guess I will have to start eating fried pig and drinking wine all day then.

My advice: Please, for God’s sake, and for Pirate’s sake, don’t interpret bible literally. Humans were given such wisdom and brain so that we can use it to make bible relevant to today’s age.

As a bonus, you might know that I in fact were engaged with both Christian and Catholic church. So yeah, not tryin to be a hypocrite about this. This rant doesn’t target Christian-but-not-Catholic church in general. While I was happy to grew in GBI Puri Indah (although only quite half of them treat us Catholics as true believers), some more crazy Christian group like **** in Melbourne were wolves with sheep coat which silently tried to dismantle my Catholic faith. 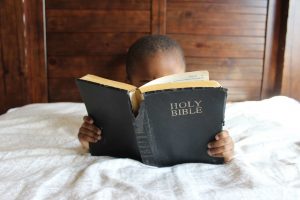